The ASB non-formal education pupils took part in the now established annual football tournament “Football unites” organized by the School of Economics and Political Science and the School of Physical Education and Sports of the Aristotle University of Thessaloniki, accompanied by their teachers and their parents.

For a second year running ASB participates in a football tournament that aims at uniting young and old through football, the most beloved sport in the world!

The School of Economics and Political Sciences and the School of Physical Education and Sports of the Aristotle University of Thessaloniki this year organized the now established annual football tournament “Football unites”. This time the tournament was dedicated to the memory of one of the best goalkeepers in the history of football Lev Yashin – a role model on and off the field – and in memory of Alkis who lost his life by hooligans – last year’s tournament was held in honor of Diego Maradona.

The Dean of the Department of Physical Education and Sports Sciences of the Aristotle University of Thessaloniki (TEFAA), welcomed us to the event and said: “Today is a tournament against violence. Anyone, whether of a different team, a different race, a different color, has the same rights and all together we can unite because sport gives us this opportunity, it is a means to show that together we can be one and stop these violent phenomena”. 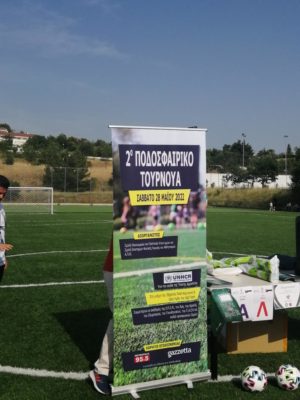 This year, the 9 to 15 age group, students of Non-Formal Education at the Diavata LTAC took part, accompanied by their teachers and parents. Children of different nationalities, different languages ​​and cultures, from accommodation centres, as well as from local team academies gathered and played together.

Grigoris Zarotiadis, Dean of the School of Economics and Political Sciences of the Aristotle University of Thessaloniki said “We recognize from our side that sport does not just promote the spirit and body of every person, but is above all a social phenomenon. In particular, football, a phenomenon with social, economic, political implications inspired us and our respective colleagues to implement a series of such events on an annual basis, with a different content each time, through which young children from different centres from many teams will play to convey this message. The message that sport unites and does not divide is a strong asset in the hands of every society, and should be conceived as such”. 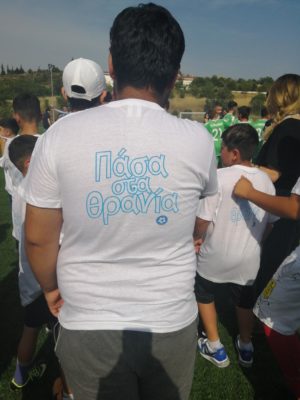 The children, most of whom met for the first time, played together against racism and football violence, showing that through sports and football  violence in any form does not fit and should not be found anywhere. Our young participants sent their own resounding message with the motto “Pasa sta thrania” (“roughly translated pass the football to the pupils”) that football unites across borders and social backgrounds.

As the two brothers from Afghanistan, Kadir and Kabir, aged fourteen and twelve, respectively, told us, they came to play with the other children and it does not matter where each of them comes from.

This is the important message of sport, to unite beyond social tensions and group preferences but through play and noble rivalry so that all can come closer to the process of integration and peaceful coexistence.

Watch the corresponding video from the daily football tournament