The drama team, formed by teenage girls and guided by the ASB NFE team, performed a short play, using body shadow theatre. The team created “…stories of happiness and sadness, which were presented behind a sheet with the help of light and shadows…”, stated Marianna Giotaki, the ASB NFE teacher who facilitated the shadow theatre.

The drama team, formed by teenage girls and guided by the ASB NFE team, performed a short play, using body shadow theatre. The team created “…stories of happiness and sadness, which were presented behind a sheet with the help of light and shadows…”, stated Marianna Giotaki, the ASB NFE teacher who facilitated the shadow theatre.

The technique of body shadows were known in Spain in the first half of the 18th century, according to the World Encyclopedia of puppetry Arts. One of the few written accounts is L’Heureuse Pêche (Happy Fishing) and was published in Paris in 1767; in this play, the magician Elamaliga gives a character the power to fly – a pantomime that lends itself well to the magic of shadow theatre.

Through the shadow theatre performance stories of friendship, cooperation, separation and reunion came alive and were presented by the team’s members, who expressed their own personal, positive message either in Greek or in their own language (Arabic, Kurdish, Farsi, Urdu).

Marianna Giotaki, spoke to us about the play and the benefits that resulted from this experience.

· Which was the idea and the inspiration behind the play?

The idea for the play came through a project we worked in rehearsals, based on feelings, either negative or positive. We worked with girls on shadow body theatre and improvisation techniques. In one of the rehearsals, I created stories of happiness and sadness, which were presented behind a sheet with the help of light and shadows. The girls in pairs or on their own made up some stories and then said a phrase that represented themselves. For example, behind the sheet, they could show that they were playing with their friends and then in front of them they would say ” I’m happy when I play with my friends ”. So, I took this opportunity and decided along with the kids to focus on their dreams and hopes, as they had said so many beautiful things during the rehearsals. We basically built it on the shadow theater. The basic idea and technique was for them to play with the light and use their shadow and body, while adding other things in the process.

· Who were the contributors that helped facilitate the play?

The contributors were the members of the drama team (girls aged 8-13) with me as their teacher. The girls’ role was very important, because I was providing them with a situation and then they came up with the story surrounding it. I didn’t determine the stories that they would come up with, I was telling them what I would like or in what context Ι would like them to think. In essence, the girls created the stories they wanted and said the phrases that expressed their own hopes and dreams, either in Greek or their own language. They were free to choose whatever they wanted; I just gave them a guideline.

· How would you describe your cooperation with the girls in something so creative?

The cooperation with the girls was very good and very constructive. They were very excited when I asked them if they would like to participate in a theatrical event (which we the teachers had in mind) and their response was very positive. We had some difficulties in the beginning, as the girls were focused on more trivial matters, like what they are going to wear or who they’re going to invite in the play. Along the way though, they impressed me with their discipline and determination and the end product justified that.

· What were the reactions on the play?

The parents and the audience applauded in the end, while many came to congratulate me personally. Nevertheless, I believe that the girls are the ones that deserve to be congratulated, as the biggest part of the creative process was their making.

· What did the girls gain from this experience? 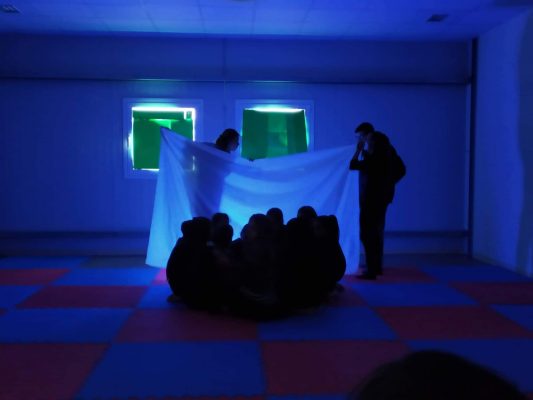 For me its important for the girls to have gained a lot of things from this experience, as they worked together. Girls from different cultural backgrounds, different countries with different religions, cooperated. They felt the importance of being in a team and working together with others for a common cause without rivalries or trouble making. Not only that, but also the discipline and the determination they showed by helping each other was so amazing, I didn’t expect it. In the end, they were so excited about the play, that they wanted to perform it again. They also wanted to discuss the whole process and make a recap of it. I believe the girls gained a lot from this experience.