Adolescents and women’s groups from all Epirus sites actively participated in the art contest “No child for sale” launched in the frame of the Unicef awareness campaign on the occasion of the European Anti-Trafficking day. This activity was prepared with the support of ASB protection and Non-Formal education teams in several afternoon gatherings: sitting, listening, interacting, drawing and painting together as to deliver the basic messages of the campaign to a wider public. With the support of IOM Greece.

We are now at the end of the first phase of the contest: 54 paintings have been chosen among 170 and yes! Art works by adolescents and women’s groups of Epirus sites were selected and figure in the digital exhibition!  Now the contest becomes public and all are invited to vote their favorite paintings.  The works are to be admired in the digital exhibition, in occasion of European Anti-Trafficking day.

The exhibits are on display until 13 Νοvember 2021: Click here to vote

To vote your preferred paintings for the finals, please choose the symbol (√) displayed on the informations on the right  (i) of each representation or from the information panel on top right. You can vote as many exhibits as you like but only one vote per exhibit is allowed! Reward the artists, your vote counts!

These are the basic messages that were rendered visually and very carefully prepared: 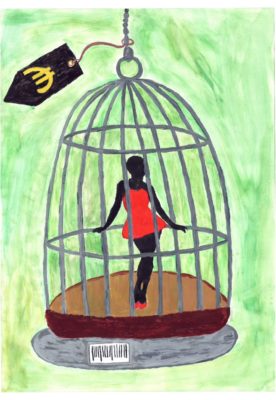 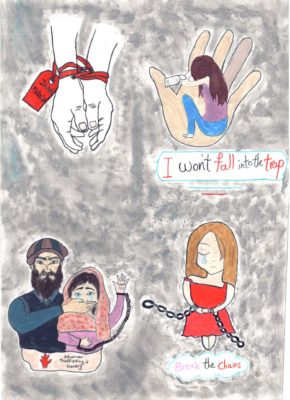 Two, three or more refugees of different communities would peacefully sit together and draw the scheme before putting in the colors. On the picture where we can see

how  dedicated they are and use thin paintbrushes to complete the painting.

But, how such a harsh reality, same wise a sensitive and delicate issue for survivors, could be explained to youngsters?

Nikolaos Gkarelias Oikonomou, psychologist, Social worker at ASB explains how the protection team approached and surrounded the adolescents and the women’s groups:

“First of all, ASB’s cultural mediators were consulted so that the content of the information on the subject would be appropriate to the audience’s culture”.

Secondly, a power point presentation introduced the adolescents on forms of Human trafficking through images while explaining the content in simple terms. Finally, a video was chosen in function of the age group. 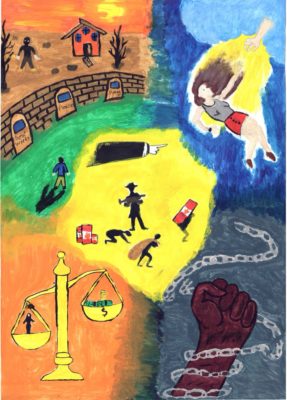 To enrich the theoretical part of the power-point presentation a discussion was triggered through Questions and Answers so that the participants could express themselves on the issue. Different case studies were then showed (e.g a victim of labor work) and smaller sub-groups were created to debate on the issue and decide on the right course of action in terms of protection for each case”.

The protection team believed that the participants would be shocked but they understood that most of the adolescents and the women groups were already familiar with the issue mostly from a personal experience.

We wish the participants are rewarded for their dedication!