New guitar classes enrich teenagers’ daily life. The only thing they needed was a guitar and it was provided! 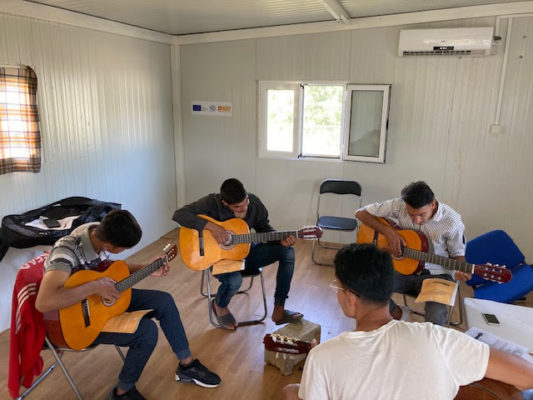 When four freshly packaged and tuned guitars turned up at the camp, a teenager with a sparkling smile on his face, welcomed us in the Non Formal Education space. He was so delighted at the sight of the guitars that he unpacked one right away.

He was the one -friend of the teacher- who had pushed the “start button” for the guitars. He asked who would be interested in forming a small group and then he “chose the best options, the most relaxed buddies, people with good behaviour”, he told us. 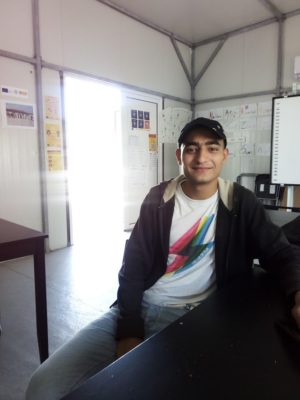 In a way, this friendly teenager is the public relations manager of the group whereas the guitar teacher’s name is Javid, who also is sitting in the school’s space.

Javid Rasuli softly takes a guitar in his hands and starts re-tuning it. (Guitars and other musical instruments don’t like trips and get unsettled). He is here with his family, both his parents and two siblings.  As a good eldest, he takes initiatives: he is over 18 now and will start teaching four youngsters, willing to expand his classes to adults as well. It will not get long before he gets overwhelmed by the demand! 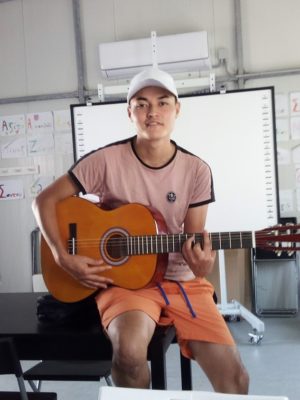 When asked where he learned playing, he started talking about his passion:

“My guitar was actually a gift from my teacher of English in Lesbos. In each English class, we sang songs for learning English. This is how it all began. The teacher was accompanying us on the guitar and in the end, taught me how to play. When Devon left for Germany, he left me his guitar as a gift to remind me of the nice times we played together even competing on who played the nicest piece. Devon Rempal, don’t you know him? He himself gives concerts. He is from Canada, came to Lesbos to teach us and lives in Germany. We had an awesome relationship. Besides, I also learned a lot from online tutorials”.

Javid then plays a little solo: “The shape of my heart” a famous song by Sting.

When asked about the upcoming guitar classes, he shares a teaching method he has in mind:

“First I will teach my group to use their fingers with harmony. The left-hand fingers on the bar, need to learn the chords (I minor, C major, etc…) and the first song I will teach is “Happy birthday!” Then I would love to teach a Persian song, “The king of our heart”. “Well, no, actually, that needs a bit of rehearsing and more technical skills ”, he adds.

Finally, he adds that “I will also be in charge of the guitars after the lessons and take care of them”.

We are sure that he will do just fine! 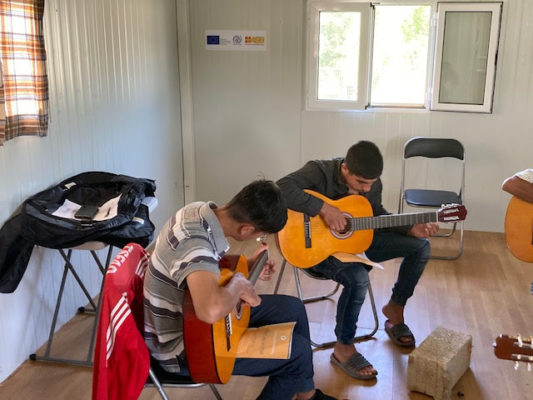