Seventeen children from three different classes at the Katsikas LTAC, following their teacher’s guidelines, built a collective mock-up to participate in the “STEAM for all” Contest. The “STEAM for all” Contest, under the auspices of UNHCR is co-organized by the Anatolia College for STEM Education together with STEMigrants.eu and addresses primary school students in Greek schools in Greece and abroad including refugee children in Non-Formal Education classes all over Greece.

More specifically, 17 children from 3 different classes at the Katsikas LTAC, following their teacher’s guidelines built a collective mock-up. The mock up was of a multi-material construct consisting of a water-powered construction (watermill) in a forest area that enables access for people with reduced mobility (wheelchair users): the power-driven watermill puts in motion a wheel towing the wheelchair to the top.

If “Promoting playful learning” is one of the evaluation criteria of the project we have to admit that the children involved were offered a sound re-creative approach to challenging school subjects such as natural sciences, mathematics, engineering and social sciences.  The aim was double:  acquiring a core of technological skills and know-how while focusing on social awareness.

“The most difficult part was to to make each group understand what they had to do”, says Kostas, the teacher.  “We worked with a problem-solving approach and this actually means that you can start again until you reach the goal, like a trial and error method. The whole philosophy behind it is that one can make an “error” which is there to be reconsidered, and worked upon.The children in the beginning were very curious. Then when we started making the mock-up they were happy because they saw their construction worked. This was the biggest reward”!

Most of all, working together on a project creates a peaceful atmosphere allowing the children to be creative and exercise different craft skills. But how was the goal achieved?

After watching the video from the construction and operation of the mock-up that the teachers had previously made, the students, were divided into individual groups who worked on different elements of the model. One group worked on the decor and the forest while other groups focused on the more technical parts.

Kostas, the teacher in charge of the technological part, told us that the idea started from two elements: the wheel and the water: “I chose materials that existed in the school and the idea was to recycle them”. Then the social input came in from Kalliopi who related technology to social awareness and helped the children to design the path, the wheelchair, the user and the forest.

Kalliopi added that “science is an international language beyond the different mother tongues: sciences provide a common ground”, she insisted. “This helped the children to cooperate. It was a great exercise for their mindset and to see how they perceive the environment as well. If you consider science as an experiment, it becomes fun and challenging”.

Good Luck to all! 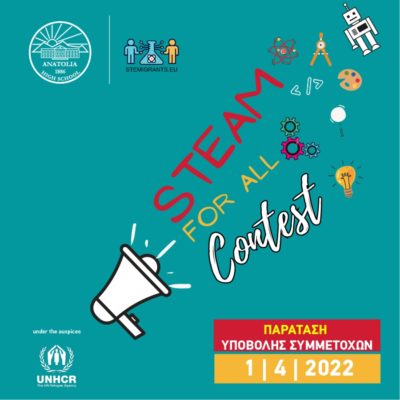