A group of six women create multi-use linen handbags during their time at the sewing lab. With the support of IOM. 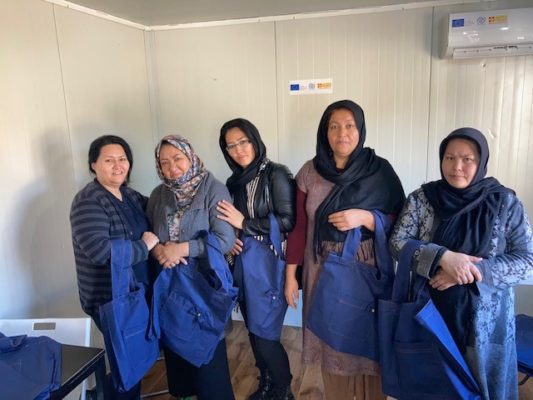 “I wanted to become a nurse, but unfortunately got expelled from that school in Iran due to my Afghani ethnicity and then had to make a conditioned choice what to do and which path to take. This is how I choose sewing as a profession. I wasn’t very happy with it in the beginning since I wanted something else, but as time passed I started to like it and I recognized my skills and discovered the beauty of this craft”.

This is how Sadiqe Rasouli starts her story about her professional development and the decisions she had to take. Following this she started a sewing course in Teheran that took three years. Once Sadiqe got her diploma, she started working from home in order to improve her technical skills.

Sadiqe discovered that the creative part in sewing and cutting is something she likes and it’s something that fulfils her. In a later stage during her working experience in Iran Sadiqe was running, for about four years, a sewing studio in cooperation with eight friends of hers, sewing mostly for female clothing orders. This resulted to be a very good experience for her, as she was able to learn and develop her own skills. 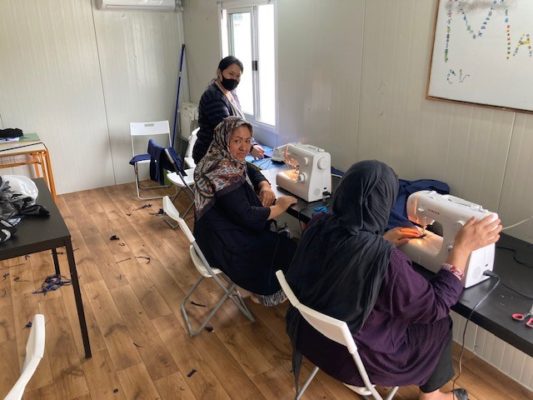 Currently, Sadiqe is a member of a female group that is frequently coming to the sewing lab in Filippiada, where they mostly perform some minor repairs.

The group decided to commence a small handbag project,  sewing multi-use linen handbags that can be used from anything like grocery shopping to school bags, or just everyday use. A group of four to five women are involved in this action all of them doing their part, from pattern designing, cutting, ironing and assembling to produce the final result.

Mrs Zainab Muradi, one of the participants is very happy that they are doing this, she explained to us that despite their difficult situation and very uncertain future, these activities help them to think positively and feel useful. Besides that, they have fun and laugh a lot while working together.

Nazdana, an Afghani young woman is also part of this and she says that she simply loves socializing with other women and this activity gives her positive energy.

It took around three weeks to complete this idea and produce sixteen handbags.

Sadiqe Rasouli, is also a mother of four children and she would like to pass on her passion and sewing skills, but she says, she would be happiest if her children choose what they will like the most and she hopes they will be able to fulfill their dreams. For herself, she still would like to have an opportunity of opening a sewing studio one day.