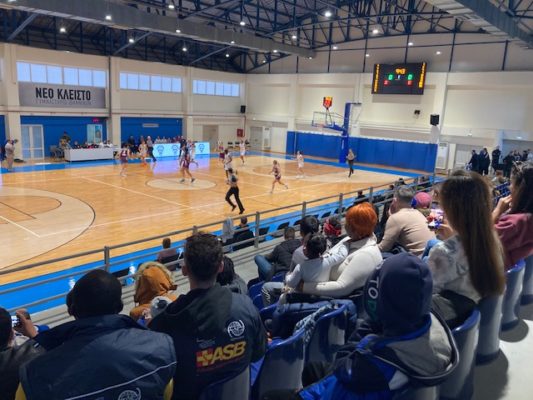 As part of community engagement in sports and active living habits, the ASB team, with the support of IOM, took a group of interested beneficiaries to the Greek Women’s basketball league game of PAS Ioannina vs Niki Lefkadas. An exciting game passionately played in a fair and sportive spirit.

Young Fre, from Eritrea, likes sports and was very excited to watch her first basketball game. She told us that in her country some people play it, but “it is mostly a man’s thing”. She enjoyed the game dynamism and with a wide smile added that “I plan to start playing”. Her friend Wintana also had never seen a basketball game before and told us that she was “impressed by the fact that they play for real and battle for every point”.

David from Somalia, told us that even though he prefers football, which he played back in Somalia, he also enjoys basketball and this was a great opportunity for him to watch a game. He enjoys watching players shooting from a distance and even more so when they score, “this is something I like and admire the most about basketball, the ability to hit such a small hoop from a distance”, he says.

The group that visited this basketball game with the ASB team had a lot of fun and left the gym satisfied, with wide smiles!