World Refugee Day is an international day designated by the United Nations to honour refugees around the globe. It falls each year on June 20 and celebrates the strength and courage of people who have been forced to flee their home country to escape conflict or persecution. World Refugee Day is an occasion to build empathy and understanding for their plight and to recognize their resilience in rebuilding their lives.

On the occasion of World Refugee Day, this year, the community came together through a cooking activity; this enabled young and old to enjoy different flavours and pass on beloved traditions.

The cooks taking part in the activity took a few moments to talk about their delicious dishes and share some of their memories.

“I am making Fumbwa”, Mina says, as she tells us that “it is a dish with vegetables, fried cod fish that we first soak in water, then fry and season with a peanut butter sauce. Nanou is preparing Pondu-ya-madesu and Ngai Ngai, an indigenous plate from her country with specific vegetables one can only find in Congo: this is called ngai ngai!  Actually it is Daddy Mvulango, my husband’s favourite dish!”

Mina has many memories of her mother who taught her the secrets “I learned how to cook as a very small girl. Mum would call me and say: Viens regarder! Come and look how I do it. I was only 13 years old when I already cooked for all the family: mum, dad, siblings and cousins, eight people around he table. At 1pm I would do the cooking, every day after school! Mina is indeed a strong and resilient woman and so she will go on passing the tradition despite the circumstances and wherever she will be.

“Cooking is much more than a basic skill” says Konstantinos who recently joined the ASB team as a Community Engagement Assistant and adds that “not only in the refugee context but even more for people living in accommodation facilities, cooking revives a feeling of everyday life and self-sufficiency improving your mood through cultural transmission and preserving roots. A traditional cooking activity among the beneficiaries aims to connect the community through this daily process, to explore diversity. Another benefit that comes from this process is learning how to cook for those who don’t have these basic life skills, boosting self-reliance”.

In the meantime Mrs Konstantina Theodorou and Mrs Katerina Tsarpelli, two of the six members from the Agricultural Woman Cooperative of Epirus, joined us to meet the rest of the “cooks” and get a taste of their rich traditions. They greet Nasdar from Iraq and explain that they too make traditional recipes and an interesting exchange takes place. Nasdar tells them she is making “dolma”, green vine-leave rolls stuffed with tomatoes, potatoes, okra, aubergines, bell peppers, green leaves, minced meat, seasoned with dill and lemon salt. It was my mother who passed on the tradition, she says. I remember her when I make this dish.  It happens that she passed away last month. I wanted to see her and hug her but I couldn’t”, she adds visibly moved. 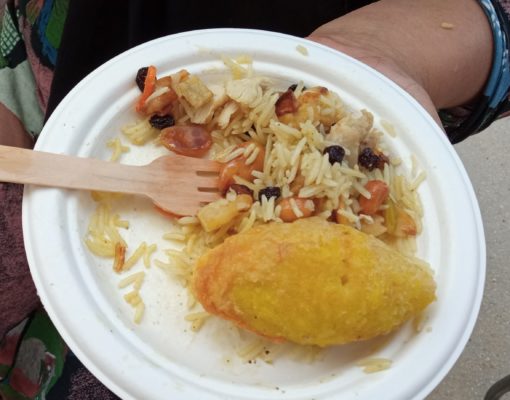 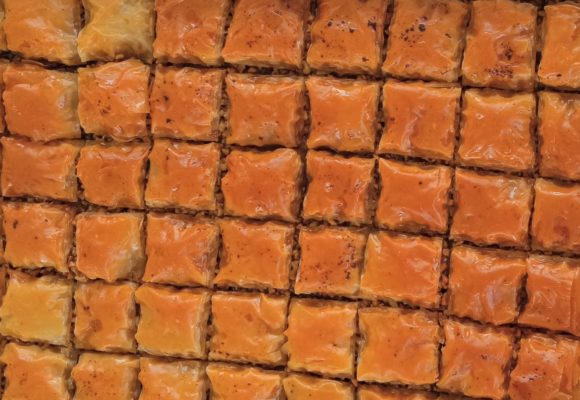 Negrez and Avin who both are from Kurdistan are making Kubba and Baklava from Iraq. Kubba is basically an Iraqi rice and potato balls dish with a delicious flavorful beef filling inside but also numerous ingredients like onions, tomatoes and aubergines, a really exquisite – all in one-  meal. Avin’s Baklava speaks for itself and became a great favorite, literally disappearing in a wink. 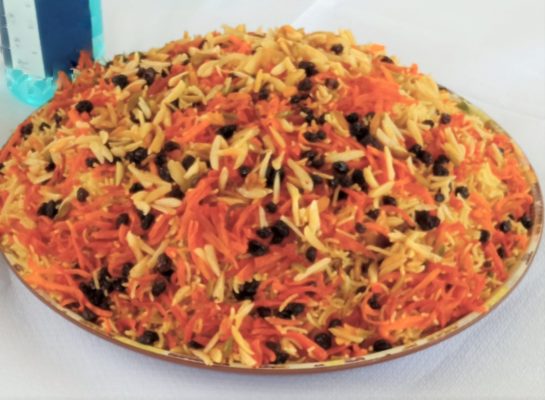 Fariba from Afghanistan made Kabuli pulao, the succulent Kabuli pilafi (see pic) beautifully presented like a cone shaped rice dish. Digging further inside he cone you will discover exquisite lamb meat. “We add nuts and raisins in our pulao, and carrots…  Kabuli is one of the most famous dishes of Afghanistan, this is what we make for guests and is our favorite”, explains Fariba to our guests. Here is also bolani (Afghan stuffed flat bread) and tsakori, a spicy sauce for accompaniment. 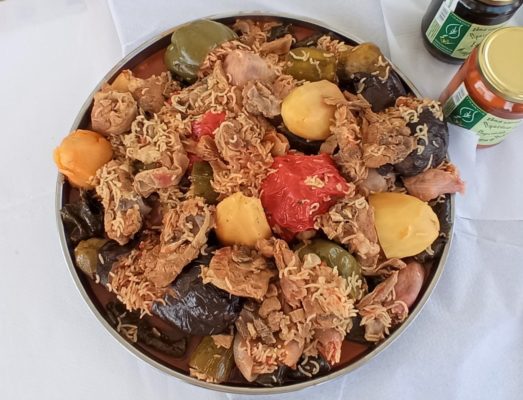 Last but not least, Alatma made an impressive Syrian dish(left), with meat and stuffed potatoes,  aubergines and 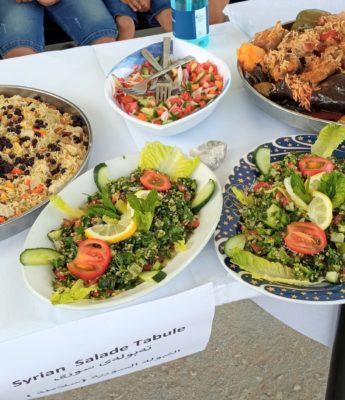 It was very touching to see how food just like music can create an inspirational momentum and bring people together!